the 727 days without karamo

Love can cross borders - and sometimes it has to. For 727 days an Austrian woman is separated from her husband after his deportation. A Chinese woman waits longingly for her return to Vienna. Many relationships fall apart because of the vindictive nature of the system. Director Anja Salomonowitz creates an artful document, giving an inside on the reality of many different people living through and thereby telling the same story. A courageous portrait of love in light of one country’s policy on foreigners.

THE 727 DAYS WITHOUT KARAMO

The first shot brings the essence into focus. In the bright, early autumn a couple are spending the afternoon together. Both are dressed in glowing yellow, the woman is waiting a little bored on a bench while her husband, in overalls and an aviator hat, navigates a bizarre flying object up and down and passed obstacles with a humming remote control. One imagines oneself as a spectator in a realm of fiction at the beginning of a story, which has committed to a witty, somewhat absurdly comical tone.

This first image is, however, simply one of Anja Salomonowitz's typical documentary art gags. Interlocking form and content together subtly. What one hears in the 90 minutes that follow is indeed unbelievable, incredible and sometimes absurd. But as unreal as some of the descriptions of the protagonists may sound, none of it is made up.

The film draws on the experiences of Austrians who have fallen in love with somebody whose passport was issued in a country outside of the EU's borders. They try to legalise their relationship in the form of a marriage and meet head on with the authorities: Emotions meet regulations, the heart collides with the law, difficulties take their course.

Documentary story-telling is always a dual process: on the one hand her story-telling style aims to address relevant socio-political conditions and raise awareness of intolerable situations and, on the other hand, to expand and vary and create anew the view on a theme with unusual narrative strategies. In THE 727 DAYS WITHOUT KARAMO the filmmaker has further refined her KURZ DAVOR IST ES PASSIERT (IT HAPPENED JUST BEFORE) basic concept for telling a documentary story differently. The material drawn from reality, and its emotional potential, are thereby placed in constant tension with each other.
The filmmaker used the project's long financing phase to have conversations with innumerable binational couples. What crystallised from this was less the colourful spectrum of different romantic scenarios, but rather the parallels and commonalities that formed constellations through couple relationships of differing income categories, age groups and geography: Getting to know one another, the desire to get married, the setbacks that arise and often, ultimately, the failure of a gruelling administrative procedure. As if the greatest common denominator of these individual stories were an almost inevitable basic pattern within the existing legal requirements.

In THE 727 DAYS WITHOUT KARAMO the protagonist's individual stories grow together into a superior love story, told collectively. No story is told to its end, each of the 20 couples interviewed in front of the camera deliver only a splinter of an overall picture that is full of fragments, and also refers to the fragmentation of their lives. Anja Salomonowitz lets the camera tell the story, in on and off-screen scenes, sometimes in conversations, sometimes in whispered voices, sometimes she films the people at home, sometimes at work. Their gestures and actions have nothing to do with the content of what is being said. Whether the camera image is set to on or off can vary within a statement. Every portrait follows a principle of refractions and fragmentation. The fault line is the common thread in a composition for a choir with soloists.

This creates distance and safeguards the affected and the viewer alike from too much emotion. Anja Salomonowitz denies both sides a cinema of pity. Above all, THE 727 DAYS WITHOUT KARAMO wants to tell the story of people fighting for another person and defending their right to choose their partner freely. Therefore the filmmaker (as in her previous films) has chosen a dominant colour in her shots: yellow. For courage and the fighting spirit and contempt.

"It was a beautiful day in August and it was our last day. We didn't manage to sort out the papers and so we decided that he would fly back and we would try to marry there. We made an excursion to the nature park where he had always liked to go and there we made plans for the future-how I would visit him, how he would come back, and how we would have a future together. And then I took him to the airport. It was very hot and it was the hardest trip in my life. When we reached the airport so many happy people came towards us. They were tanned from their holidays, light-hearted, the couples hugged each other and kissed. And me? I had to say goodbye to my love.
He turned round one last time and then I just stood there. Alone. After two years, completely alone again. He was gone.

It was as if I tumbled into a black hole. I tried to leave the airport as fast as possible. The corridors seemed to get longer and longer, and the people approaching looked happier and happier, and I was sad back at them.

And so I went home with these feelings. And since then I've been desperately fighting to get all these papers together, to fulfil all their requirements, so that I can then marry my love in Nigeria."

"I work as a textile restorer. I have 4 children: three from my first marriage and a fourth one after getting to know my husband in 2004. Now I'm forced to earn the entire family income because my husband is enrolled in a German course and has to fulfil the integration agreement and can't receive any job seeker's allowance yet because of this. This means I have to earn around 1200 euro for the both of us.
Then another 122 euro per child. I have four children so that's around 500 euro altogether. Together that's already 1700 euro. Then I have to add the rent to that, which in my case, because I have a large family, is 830 euro. This brings me to roughly 2500 euro, minus 250 euro in free lodging. So this means: I as a mother of four must work 50 hours a week to be able to reach an income of 2200 euro. What the state demands of me here, so as to pursue my marriage, is an impossible thing for me. Yes, that's my reality."

"A clever film, wrapped in power and beauty"

Anja Salomonowitz´s artistically constructed documentary THE 727 DAYS WITHOUT KARAMO tackles a difficult and at time moving issue - the tough immigration laws in Austria - with compassion and a engagingly quirky edge.

THE 727 DAYS WITHOUT KARAMO is elegantly shot. Artistically framed and gently emotional, with Salomonowitz making especially good use of Bernhard Fleischmann´s impressive score and playfully layering in some clever sound design quirks that help make what could have been an unrelentingly dry subject all the more human and insightfull." 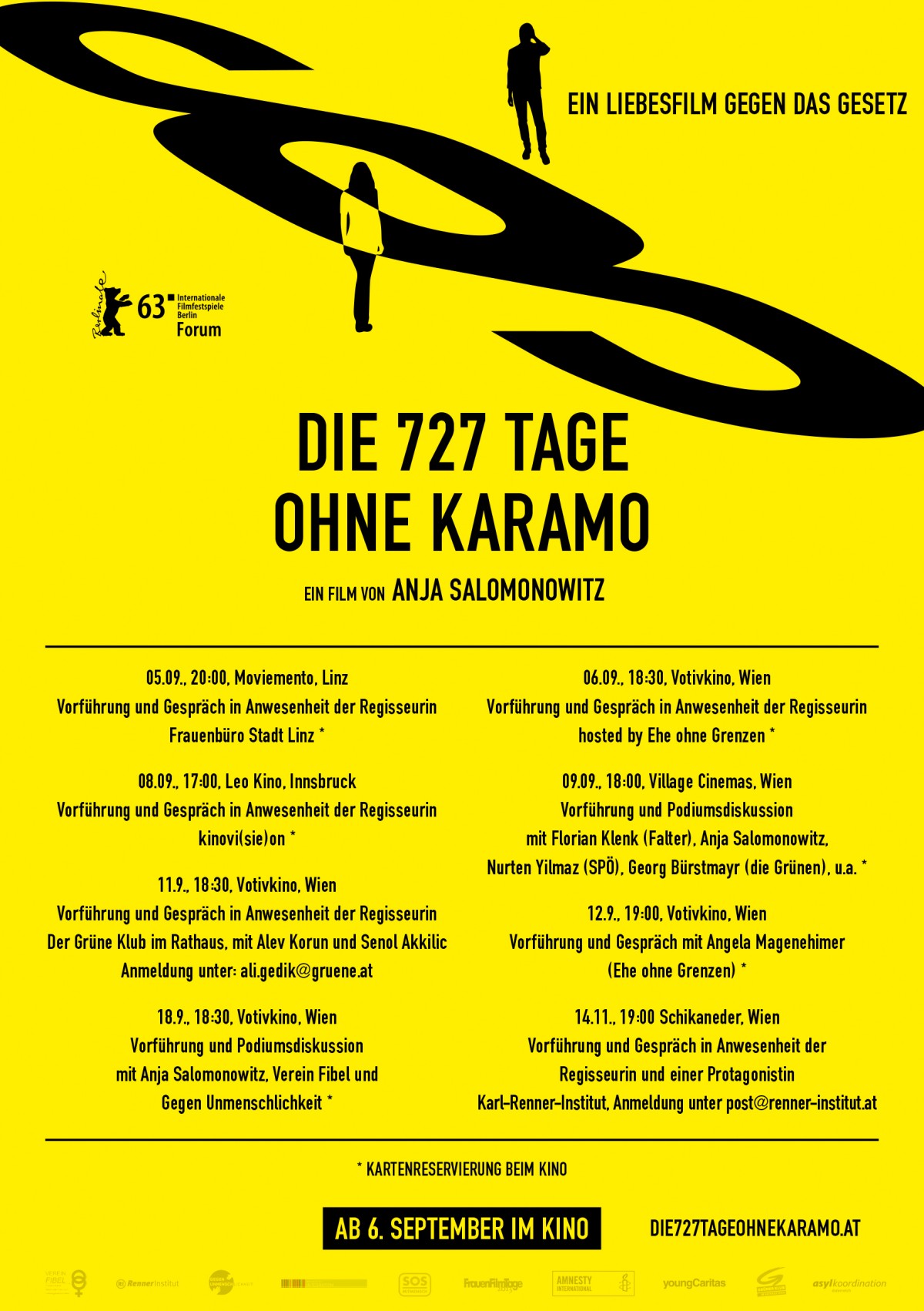